How Does Thermography Work? 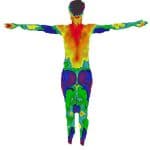 Breast tumors and some other tumors are able to found on thermal imaging through the process known as Angioneogenesis, the formation of new blood vessel that supply nutrients to a tumor.  This asymmetric increase in blood flow creates an increase in temperature that can be picked up by medical thermal cameras. Many times this blood supply increases over time as a tumor grows and is an important part of baseline studies and the ability for them to identify a tumor at the earliest possible moment.

What Can Thermography Detect?

Thermography picks up skin surface temperatures on the human body that can be used for analysis by a trained thermologist.  Any disease process that emits heat or decreases circulation can possibly be detected through infrared thermal imaging.  The FDA has cleared the following as adjunctive screening methods with thermography:

Other promising and emerging areas deserving consideration include:

Breast Thermography was introduced in Quebec Canada in 1956 by Dr Robert Lawson who published the first medical paper on breast thermography on 26 women with breast cancer.  His research showed that women with breast cancer had over a 2 degrees delta T when comparing the pathological breast with the opposite side.  In the 1960’s infrared cameras were introduced and the first Barnes Thermograph was patented.  Later liquid crystal bras and plates were used as a more affordable method of screening.

In 1972, the Department of Health, Education and Welfare declared that Breast Thermography was ‘Beyond Experimental.’ Over 4000 articles were published on thermography and over 800 focused on breast thermography. All major medical institutions implemented the technology in the USA.  Other countries adopted the use as well.­

The above image is that of the first thermal study performed by Robert Lawson in Quebec, CA in 1956. This was published and can be found in PUBMED

Thermography was FDA cleared as an adjunctive screening procedure for breast cancer in 1982.

Recent advancements in technology have allowed us to perform even more accurate exams. Studies have been performed on thermography when compared against other forms of testing.  A 2008 study published in the American Journal of Surgery, performed at New York Presbyterian Hospital Cornell showed a 97% sensitivity in discriminating cancer compared to biopsy. These results showed thermography to accurately identify 97% (58 of 60) of cancers when compared to mammography.  Obesity and large breasts were a limiting factor.

Dr. Piana and Sepper have published an article in the pan American Journal of Thermology called, Contemporary Evaluation of Thermal Breast Screening, that expands on the history and current acceptance of breast thermography.

Thermography or Digital Infrared Imaging (DITI) helps in detecting heat produced by an increased level of blood vessel circulation (angioneogenesis) and metabolic changes linked with the genesis of a tumor. Benefits to Thermography include:

Types of Cameras Used in Thermography

Cameras used in the industry vary considerably.  The higher the resolution the better to a point (approx. 640×480).  It is important to make sure the Thermologist is using FDA Cleared systems.   Medical Thermal Cameras produce high-resolution, ultra-sensitive infrared images that can be translated in to heat measurements.  Many changes in technology have occurred in the past 10 years.  Always ask the age of the Thermologist’ s camera.