What is Breast Thermography?

Breast Thermography is a non-invasive and painless way to screen for breast cancer without radiation or compression of the breast. It uses state of the art medical infrared technology to assess heat in the breast. Comparative exams create a baseline for monitoring breast health based on individual thermal patterns and changes.

Scientists use infrared technology in most aspects of modern science including weather, space programs, military, espionage, and other applications.  In these areas thermography is a 100% reliable tool for assessment to be used along with other technologies.

The above image is of a patient with Invasive Ductal Carcinoma that was not found on mammography months prior.  This image shows the progression in to the lymph system and adjacent musculature.

How Does Thermography Work?

Breast tumors and some other tumors are able to found on thermal imaging through the process known as Angioneogenesis, the formation of new blood vessel that supply nutrients to a tumor.  This asymmetric increase in blood flow creates an increase in temperature that can be picked up by medical thermal cameras. Many times this blood supply increases over time as a tumor grows and is an important part of baseline studies and the ability for them to identify a tumor at the earliest possible moment.

Breast Thermography was introduced in Quebec Canada in 1956 by Dr Robert Lawson who published the first medical paper on breast thermography on 26 women with breast cancer.  His research showed that women with breast cancer had over a 2 degrees delta T when comparing the pathological breast with the opposite side.  In the 1960’s infrared cameras were introduced and the first Barnes Thermograph was patented.  Later liquid crystal bras and plates were used as a more affordable method of screening.

In 1972, the Department of Health, Education and Welfare declared that Breast Thermography was ‘Beyond Experimental.’ Over 4000 articles were published on thermography and over 800 focused on breast thermography. All major medical institutions implemented the technology in the USA.  Other countries adopted the use as well.­

The above image is that of the first thermal study performed by Robert Lawson in Quebec, CA in 1956. This was published and can be found in PUBMED

Thermography is an effective, safe, and comfortable adjunctive procedure for screening for breast cancer. Thermography is NOT a stand-alone diagnostic test, but is a safer and more comfortable way for women to screen for breast cancer more frequently. In some cases, breast thermography has detected breast cancer in women with negative mammograms. The November 2012 article in the New England Journal of Medicine brought this fact to light. “Mammograms have failed to reduce fatalities in cancer across a population base as a sole method of screening.” Thus, a multi-modal approach, incorporating more methods than just mammography, could be life-saving to many women.

Additionally, a very important area of consideration is the neglected category of women under the age of 40, as well as women with dense breasts who are unable to be effectively screened with mammography and the current standard of care. A push is currently underway to use thermography as a method to cover this gap. There are over 20,000 cases of breast cancer in the age group of women under 40 each year in the USA. When cancer occurs in a younger woman it is usually a much more aggressive form, and less likely to respond to treatment. There is currently no routine screening test for women under 40.  We propose that thermography may fill this void and should be investigated as a viable test for these women.

This non-invasive physical test known as Thermography lasts for around 15 minutes. Unlike like mammography exams, it doesn’t lay any sort of stress on the breast. It uses digital infrared imaging to discover any symmetrical changes in the breast. Women with implants or those with a mastectomy fall outside of the “routine” analysis, but are able to be tested with some adaptations in evaluation procedures.

Testing is  performed in the physician’s or technician’s office. The patient will be asked to fill out a breast history form. The examination may be in a privacy setup behind a curtain.  The patient will be left for 10-15 minutes to let their body reach equilibrium with the room’s temperature.  After 15 minutes the patient will be positioned in front of the camera (thermography system) to image the upper chest, underarms, and the breasts.

These images are captured in real time from the infrared imaging camera then stored. All images are stored for comparison of future images so that a baseline can be achieved. The images provide a clear view to vascular patterns, temperature differentials, and possible pathological conditions.

Once the images are captured they will be interpreted by a PACT Certified Clinical Thermologist., who will process and grade the images digitally. After analyzing the images, they are graded using a PACT standardized reading protocol. 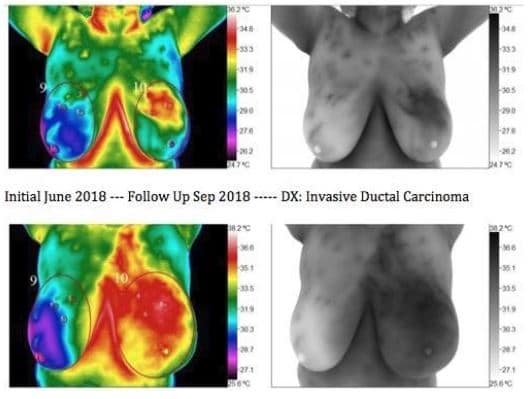 The images were taken at  3-month interval.  As it is seen here the progression of Breast Cancer can be rapid.  Proper follow-up ask directed by the interpreting thermologist can not be over-stressed, as the caveat in thermography is the perceived non-importance, or trying to compare it to mammography.

We are at the cutting edge in technology and have seen some remarkable presentations in the physiology of the body.  We are pioneering areas that have never been seen before.  One of these areas is in the area of toxicity.  We have established a relationship between Hormone Toxicity/ Fibrocystic Breasts and small pockets of inflammation that we describe as “leopard spots”.

More properly these areas are sequestered areas of inflammation due to toxins(irritants) in the form of several possibilities.  Through massive deduction of hundreds of thousands of cases we theorize these points are aberrant and only found in pathological patients. We have established this through clinical experience and intense study of specific habits of our large patient base. For example, we notice an absence or minimization of these spots in patients who live a toxin free life and adhere to strict diet and lifestyle.

We need a large study of this nature but understanding that studies of this size only are performed for drug companies we will probably never see one.  The best we can offer at this point is our experience and observations until we can fund such a study.

Not all tests are perfect or 100 percent accurate.  It is important to combine testing for optimal outcome.  The following will limit successful outcome measurements to a point”

The Promise of Breast Thermography

Thermology has become a valued and recognized tool in the scientific community.  It is used in many disciplines of science and is growing as a viable choice for imaging the physiology of the human body. Thermography should be used by medical personnel in the fight against breast cancer and the promotion of breast health.

Breast Thermography Testing and The FDA

We make it clear in all of our testing that the FDA stance on breast thermography is a valid one and has been adopted by Breast Thermography International and the Professional Academy of Clinical Thermology.  The more information in the quest for the early detection of breast cancer that we have the more lives will be saved.  The November 2012 article in the New England Journal of Medicine brought this fact to light.  Mammograms have failed to reduce fatalities in cancer across a population base as a sole method of screening.  We hope the medical community will analyze this data and provide a multi modal approach to breast cancer screening.  We would like to see research in the area of combining non radiation tests (MRI, Ultrasound, Thermography).  It would be simple to incorporate breast thermography in to the current screening regiments.

None of the case studies within this site should lead any patient to choose breast thermography as the sole method for screening.

What Else Can Thermography Detect?

Breast Thermography can detect and monitor:

Background
Breast cancer is one of the major problems of modern oncology, and has certainly received the most attention. The World Health Organization (WHO) estimates that by 2030 there will be 26.4 million new cases of breast cancer annually worldwide, and 17 million people will die from this terrible disease.
Breast cancer is frequently found in women predominantly between the ages of 32-38 years old who are pregnant or have just given birth. According to statistics, breast cancer occurs 1 in 3000 pregnancy cases. About 3% of all cases are diagnosed during pregnancy, and 25% are seen in women less than 45 years of age. It is these women who currently do not have a method of annual screening, and in turn leave behind young families when they die. Adding a valid method of screening for these mothers will allow for a greater survival rate as well as a decrease in overall healthcare expenses. Early detection of breast cancer implies earlier treatment, therefore saving more lives, which the current system of conventional screening mammography has not achieved.
Earlier diagnosis will aid in decreasing the cost of overall healthcare in several areas. First, the number of full radical mastectomies will be reduced and more lumpectomies will be performed. This will cut down on the cost of not only the hospitalization stay, but the time of disability. There would be less reconstructive procedures required as breast integrity can be maintained. Finally, the need for costly chemotherapy could be lessened in the absence of lymph node involvement.